Hello! I feel like not a lot has been going on but for some reason I feel stressed! I think I am pretty close to being done with Christmas shopping...and wrapping. I sorted through all the baby clothes and have them washed and put away, my house is unpacked...well, for the most part. There are four or five boxes or random thing that I either need to toss or hide in the basement! haha So I THINK I am ready for Christmas.

I just thought I would write down a few funny things Morgan has been doing lately, this is mostly for my sake so sorry for no pictures, feel free to stop reading! :)

*She is in her princess dresses almost all day long,
*She is always talking about Cinderella, "where dreams come true"...do you think she has watched it one to many times? :)
*She likes to sing into Q-tips, pretending they are her microphones. She was doing this the other day in the bathroom mirror and singing I Love to See the Temple. Too cute!
*She has started "pretending" if that makes sense. Today she pretended that her orange slice was the princess and it was on top of the 'castle' aka her sippy cup.
*She loves Little Einsteins and talks about rockets all the time
*Every time we pass a building that has a point or some sore of steeple on it she thinks it is the temple

Anyway, I am sure there is more but I just wanted to get those written down so I don't forget all the cute things she does!

I went to the doctor today and I was just SURE I was dialated and the baby was coming soon, but alas I am not. It makes me almost tempted to make the drive to Utah for Christmas! I am getting more and more excited and more and more nervous for this baby. When I was going through her clothes I think is when I really really got excited. I still just can't imagine another kid! Hopefully all goes well, and I did finally take a pregnant picture I just don't know where the camera is to get it off! SO, maybe next time....if your lucky!

I hope everyone had a happy Thanksgiving, we sure did. It was so nice to get away for a few days. I took off a few days before Jeff was able to come. Morgan and I took off on Monday morning and got to Utah early evening and were able to spend some time with my brother and his family who were ironically coming to Denver for Thanksgiving. After visiting with them we took off to my in-laws house. There we had dinner and an FHE with Jeff's sister and brother-in-law from Washington, his parents, his grandparents, and his aunt and uncle. It was so fun. After FHE was over the girls decided to go to a late night showing of TWILIGHT. (It was good, not great. I would definitely watch it again. The whole time I just kept wondering what Mom and Grandma were thinking since they haven't read the book....I don't suggest not reading the book and watching the movie, I don't think you would get it and you would think we were all crazy!) I think I am getting too old for late night movies because I was exhausted the next day! :) The next day Morgan and I went and visited old friends from work and went to lunch with my brother and Jeff's sister, Olive Garden mmmmmmmmm.

I was able to get most of the things on my list of things to buy in Utah. I got smartie suckers (they are great because they aren't sticky and I can't find them anywhere here in Colorado), I also went to the For Every Body Outlet and got four yummy candles for cheap and they smell great!!! If you live in Utah you need to see this store I love it! I also got some Stephens hot chocolate at Costco! mmm They were 4/$10, here they are $3.50 a can! I felt like it was Christmas!

Then we picked Jeff up at the airport and went to dinner at Jeff's cousin and our good friends house for dinner. mmm It was so good we had sticky chicken and if anyone wants the recipe she sent it to me and I have already tried it and I want it again! mmm Maybe it is because I am pregnant but I would have to say it is in my top five favorite meals right now!

The next day was Thanksgiving and it was wonderful! We went to Jeff's uncle's house and all but one of Jeff's uncles on his Dads side was there. It was great, I love spending time with family....and of course good food sure doesn't hurt anything! I wish I would have thought to take out my camera so you could have seen the spread! THEN the table FULL of desserts! Holy sam, it was a great day! To top it off we played games the rest of the night, it was great (p.s. Jeff's sister found the best game, it is called wits and wagers, the game was great if anyone is looking for a new game to play I highly recommend it!)

Friday I kept debating if I was going to wake up early and finally decided against it. All I wanted was flannel from JoAnns that was on sale for $1.50 a yd. I did end up going to wal-mart with my sister-in-law and still got some great deals. AND they were price matching JoAnn's deal on flannel!!! They don't have quite the array of fabrics as JoAnn's but I still got some cute stuff...what a great trip. :) After that I headed over to Jeff's aunts house and made some fun Christmas crafts, so fun! Since i am not crafty in the least it was so nice to have someone there who could help me along. :)

All in all it was a great trip with great food, family, fun, and crafts. Here are just a few pictures from the week: 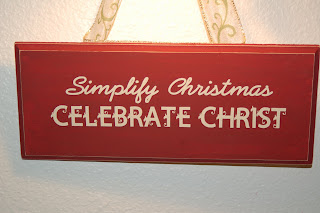 Jeff's aunt has a vinyl machine and the stuff to cut the wood out, so we did all of this right there at her house. 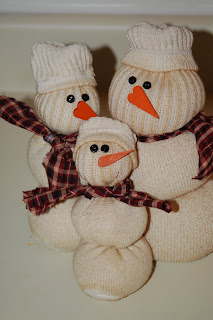 Then we made these cute sock snowmen. The aunt who is like Martha Stewart showed us how. Amazing, I would have never thought to do this! 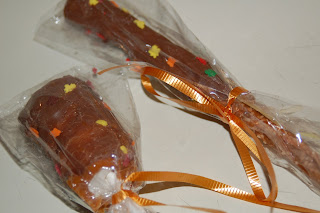 Jeff's mom, sister, grandma and I made these one morning. Carmel and chocolate covered marshmallows and pretzel rods. YUM! They were a lot easier that I expected, I am pretty sure I will be doing this again! 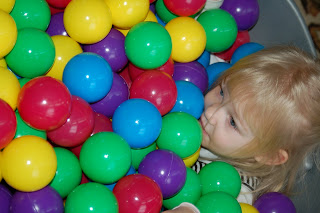 When I went shopping Friday morning this is what I came back to. Grandma brought out these fun balls and put them in a big Tupperware container, Morgan kept calling it her bubble bath! It was a big hit with Morgan and her cute cousin Brent. 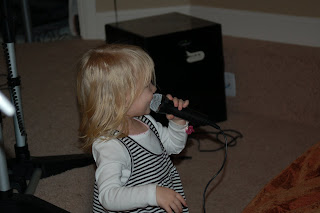 The next American Idol. :) 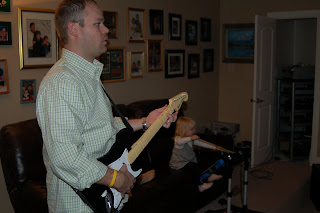 Jeff enjoying rock band. I like watching Morgan in the background playing the drums. :) 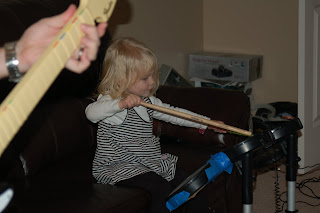 Maybe she will be a rockstar! :) 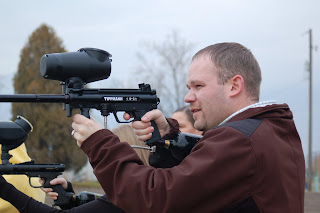 The annual Sucher family turkey shoot. I hadn't ever heard of a turkey shoot until I married into the Sucher family. The first year it started off shooting a small BB gun in there cement storage room...and now...paint ball guns outside against a covered concrete wall! It was SO fun!!! I had never shot a paintball gun before and I can see how people can get really into it, although the thought of one hitting me doesn't sound to appealing. :) 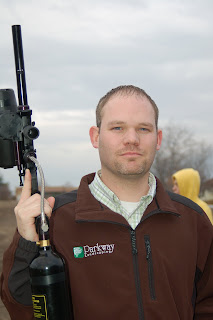 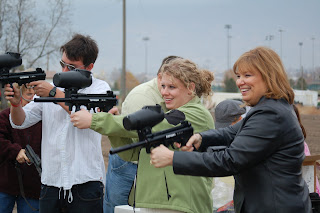 Me and my Mother-in-law. Don't let that smile fool you she has an AMAZING shot! 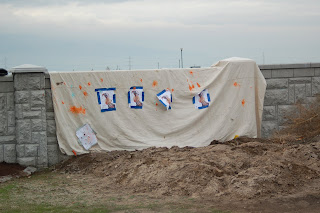 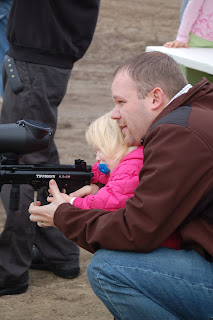 Daddy teaching Morgan how to protect herself. (She has a blue whistle in her mouth shaped as lips just in case you were wondering. ) 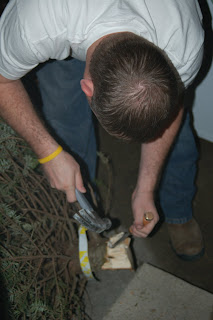 This last picture has nothing to do with Thanksgiving but it was to funny not to share. Our good friends bought a real live Christmas tree this year and we have a table saw (at least I think that is what it is) so they were just going to cut some of the bottom off, but alas it wouldn't work because all the branches were in the way. SO, Jeff decided he would still help out and chisel the bottom inch and a half off. haha, I was so confused when I heard a hammering noise outside and not a saw. BUT, it worked, he got it off, I just hope the tree makes it till Christmas!