So a few months ago, back when I was only a few weeks pregnant I fed the girls breakfast and went upstairs to lie down for a few minutes because I was nauseous.  A little while later I hear a bloody murder scream.  This is nothing TO unusual but a few seconds into the cry I knew something was really wrong, I go running downstairs as Whitney comes running upstairs and she shows me blood on her finger.  Ok, I thought, this is alright.  Apparently Morgan slammed Whitney's finger in the sliding glass door, ouch.  I grabbed a clean rag and wrap it around her finger and hold it for a minute or two.  Then I took it off to get a better look....she had a cut across the top of her pinkie finger and I pushed on it and I saw bone.  I freaked out.  I started yelling to Morgan to get shoes on and I start scrambling to get shoes, purse and to make a phone call because it was the weekend (of course).  SO, I call a few friends of mine who are on the same insurance to see where I am supposed to go, urgent care?  Emergency room?  No one at the insurance company ever answers all you ever get is pre-recorded messages.  Lame.  ANYWAY, my mom finally told me to just go to the urgent care.

We drove as fast as we could, the whole time I am trying to stay calm.  We made it there and get checked in and they said it would be quick, but those thirty minutes or so were not quick.  Finally they call us back and set us up to get stitches.  Whitney did so good, once we were at urgent care she had stopped crying and she was just talking to the doctor and nurse and then she had to have a shot in her pinkie which she didn't appreciate.  After that she was a peach just talking to everyone asking what they were doing.

I was doing pretty good but towards the end I started feeling a little weak.  I was so embarrassed I had to sit down.  I don't know if it was the blood, or that it was my Whitney, or because I was pregnant.  I am hoping it was because of pregnancy and lack of food.  :)  They said it took a lot longer to sew up because a tip of her bone chipped off, some bone was exposed and it cut her finger right on the nail bed so he had to try to sew some fingernail back on so she could grow a fingernail there.

It was an awesome morning.  All of us un-bathed, in pajamas, hanging out at the doctors office for three hours.  I haven't ever had stitches or anything to traumatic happen to me or my kids so I will count this as a blessing that it could have been something worse but I think I will pass on anything else like this from happening.  Can I do that?  Just say pass?  Because I do.  :)  Anyway here are some pictures from the exciting event...some may be graphic but I didn't have a great camera with me so they are fuzzy. 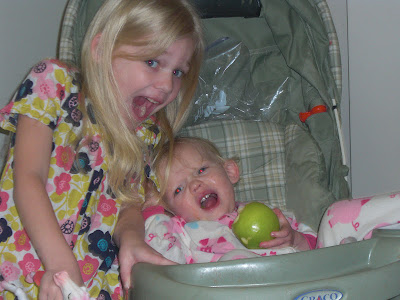